Yoga, Meditation, and the Aging Brain 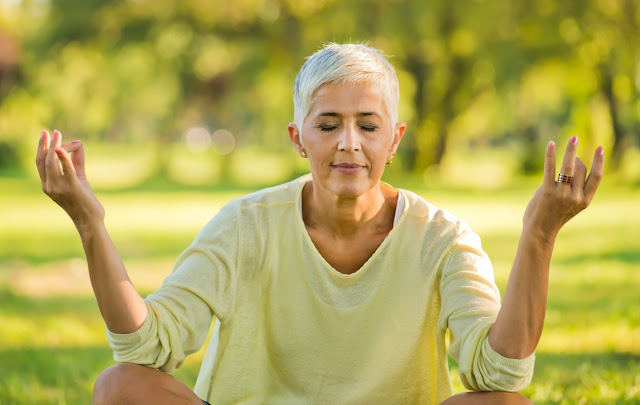 The benefits of yoga and meditation are seemingly endless.

From the somewhat obvious and widely-reported physical benefits, to the researched and documentedhealing powers, to the mental and emotional benefits—a lot of good can come from these mindfulness practices. So, when we look at yoga's effects, especially on the brain, it's not exactly surprising to find that there are benefits there, too.

According to research, yoga and meditation could have the potential to slow down the progression of Alzheimer's disease, and possibly help as a preventative measure. A quick visit to the Alzheimer's Association website will show you just how many people in the world are touched by the disease. According the site: “An estimated 5.3 million Americans of all ages have Alzheimer's disease in 2015,” and “Alzheimer's disease is the sixth leading cause of death in the United States.”

The progression of Alzheimer's can be slow, and a diagnosis or recognition of symptoms can be stressful, depressing, and emotionally taxing. The Alzheimer's Association suggests that: “Enhancing your spiritual life can help you cope with challenging feelings, find meaning in your diagnosis, and live your life more deeply.”

While it may not be the cure we're all hoping for, with the help of meditation and yoga those suffering from the disease can work toward an improved quality of life.

It is understood, though perhaps not easily accepted, that as we age our cognitive function changes, and even declines... We may not like it, but it's a fact of life, and a normal reaction to the aging process. Another normal reaction? The desire to hold off the inevitable, for as long as possible, however possible. Emory University's Alzheimer's Disease Research Center touches on “certain interventions [that] can sharpen cognitive processes,” which include: “reducing stress, maintaining good health, keeping mentally stimulated, and using active strategies (strategies that can be helpful to facilitate memory).”

A study discussed in ScienceDaily from the Beth Israel Deaconess Medical Center honed in on the power of meditation in relation to the progression of mental deterioration. The research focused on finding a correlation between meditation practice and stress relief, and its effect on the speed at which Alzheimer's and “other dementias” progressed. The study participants were adults ranging in age from 55 to 90, and 14 of them had already been diagnosed with “mild cognitive impairment.” Broken into two groups, one used meditation and yoga as a form of “Mindful Based Stress Reduction” (MBSR), while the other group received normal care.

With the use of neuroimaging the authors of the study were able to visually monitor the impact of both forms of care on the groups. Most importantly the researchers could view the influence on the hippocampus (“the part of the brain responsible for emotions, learning, and memory”). According to Beth Israel Deaconess Medical Center, the study found that: “Both groups experienced atrophy of the hippocampus, but those who practiced MBSR experienced less atrophy.”

Rebecca Erwin Wells, MD, the first author on the study, said: “MBSR is a relatively simple intervention, with very little downside that may provide real promise for these individuals who have very few treatment options.”

Breathing and the Brain

All yogis know that breathing is a fundamental part of practice. But did you know that this "yogi breathing" can actually prove beneficial to your brain and brain function?

The deep breathing that comes with a yoga practice can help to increase levels of Nerve Growth Factor (NGF), an important protein that, according to Huffington Post reporter Elaine Gavalas, “protects brain neurons.” NGF has been found to be much less abundant in those living with Alzheimer's disease, but as Gavalas writes, “for the first time, breakthrough research reveals NGF can be increased with yoga breathing.”

You know yoga makes you feel good. But it’s even more satisfying striking a pose and practicing your breathing when you know there are researched health benefits behind them. So make time for your breath, and your practice, it’s not only good for your soul and body, but your mind as well.