I Went for the Gold and Tried Cupping: Here’s What Happened 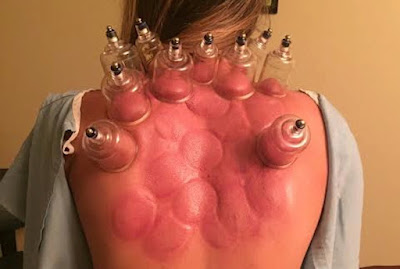 Let the record show: I've been wanting to try cupping long before it made its Olympic debut.

That being said, after watching countless YouTube videos of cupping therapy and perusing Google images I wasn't exactly running out the door to try it. It looks pretty intense.
But seeing Olympic athletes—who likely wouldn't compromise their health for anything—with cupping marks made me a little less apprehensive. If Michael Phelps will do it, so will I. So with a bit of nervousness, I set out to the holistic healers at Huntington Acupuncture & Healing to give cupping a try.

Cupping is an ancient therapy that was developed thousands of years ago. It's been used to relieve pain, release built-up toxins, and free blocked energy in the body and muscles. When I arrived at Huntington Acupuncture & Healing I was given some additional information about cupping. While waiting to be seen I read The Art of Cupping, written by licensed acupuncturist Susan Johnson. She described cupping as a “suction technique designed to pull toxin build-up and muscle spasm from the body's deeper tissue to the surface of the skin.”

Google images of skin bubbled up and red beneath cups flashed into my mind... I thought for sure this was going to hurt. But hopefully it'd be worth it.

As I waited and read I learned that cupping therapy can actually tell us three important things about our bodies:
All of these answers become apparent by the way in which our bodies react to the therapy. The color the skin turns beneath the cup can be the most telling. According to Johnson: “Light or moderate blockage will cause the skin under a cup to color pink or red ... severe stagnation can cause the skin to color a deep scarlet, purple, or even black.”

Cue anxiety... Was I going to turn purple?!

Why Was I Trying It?

My main reason for wanting to try cupping in the first place was for pain relief. Up to this point my yoga and pilates practice have both served—and still serve—as my main source of pain management. But, I still suffer from scoliosis-related back pain on the daily—like level six pain on a scale from one to 10 every. single. day. So I'm pretty willing to try anything that could potentially offer me some relief... Even suction-cupping the skin on my back.

We started with fire cupping.
As you might imagine, the name alone had me feeling pretty terrified. I laid face down, face in hole, ready, and nervous. I was on a massage table but I certainly wasn't relaxed. But Sara (L.AC., DIPL, CH), my practitioner, was great. She walked me through the process letting me know what to expect, which helped to calm my nerves.

Fire cupping began with an oil rubdown on my entire back. So, off to a good start.

Next, an alcohol-soaked cotton ball was lit on fire and briefly placed inside a glass cup. The longer the flame is held inside the cup the deeper the suction it will create. Once the cotton ball is removed from the cup, the cup is placed onto the skin, creating the suction. (Side note: I was totally afraid this was going to burn me... It didn't.) Keeping the suction intact, the practitioner glildes the cup up and down the back. This was a truly blissful experience. The suction did not hurt in the least, and the massage was strong, but amazing.

After this, I was feeling incredibly relaxed. Relaxed enough to not completely freak out about the next phase of this cupping experience...

This was what I was most nervous for. The cups are placed on your back, one by one, and a hand-held pump is used to create the suction. Feeling the pressure in the cup pulling my skin up was probably one of the most bizarre sensations I've ever experienced. It was intense.

Sara did about four pumps per cup, but said some people can tolerate up to six. I'd like to meet those people.

Between my shoulder blades is where I experience the worst back pain, and when the cups were placed there it felt oddly good. Other spots, like closer to my neck and on my traps, didn't hurt per se, but it certainly made me go "Ooh!" My photographer didn't exactly help in the matter (thanks, mom), as she gasped telling me how crazy my back looked.

Pressing onto the tip of the cup where the pump is placed removes the suction, and causes an audible deflation sound. With each puff of deflation came instant, deep relief. By the time the last cup came off I felt like a ball of mush. My back felt so loose. I stretched and moved every which way waiting to feel the familiar twinges of pain, but felt none. Without the usual pain, I was experiencing a greater range of motion as I contorted my back into new positions. Moving freely like this—post-cups—felt so good. I wondered why I hadn't tried this sooner.

Also, the state of relaxtion I was in was incredible. I felt that I could breathe deeper, I spoke notably slower and softer, and felt such a deep sense of calm over my entire body. And then I went to sleep...

I woke up the next morning feeling pretty sore. I'd liken it to how you'd probably feel after a very intense workout where you've engaged muscles that haven't been used in quite some time. Spots where the cups had felt the most intense felt the most sore, like my traps. These were muscles I rarely paid attention to, but regularly felt pain in. I noticed these were also the spots that had the darkest circles. Referencing back to what I'd read, those dark circles meant that those were the spots of my body with the most stagnant energy.

I took the photo above a full 24 hours after cupping. My fiance was freaked out, people at the supermarket gawked at my circles, and none of my friends wanted to touch me for fear of hurting me. Talk about feeling like an outcast!

Fortunately the spots did not hurt to the touch at all. Though, I will agree, the look was a bit disconcerting. Now I'm five days post-cupping and the marks are almost entirely gone (though Sara told me everyone has a different tolerance so the marks could last longer). So far, the relief of pain and greater range of motion still remain—most notably between my shoulder blades.
All in all I'd have to say that cupping was a pretty cool experience, and one that I would definitely try again, marks and all.

Have you tried cupping?