Eddie Stern and the Urban Yogis: Yoga, Not Violence 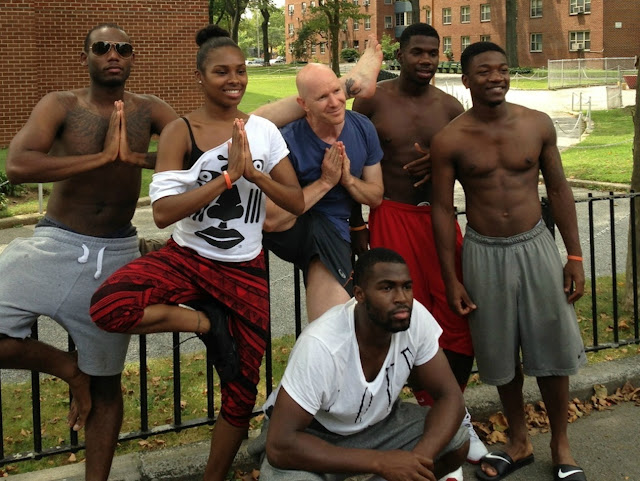 The Urban Yogis program utilizes yoga and meditation to engage the community, teach and inspire youth, and help put an end to violence.

The program started with five young adults from South-Side Jamaica, Queens. Each personally affected by "tragedies due to gun and other types of violence." Now the inaugural members have become dedicated yoga and meditation practitioners, teaching yoga throughout the New York City Public School system.

But for where they are now, one member in particular didn't exactly come to yoga with the initial reaction you might expect. While some get excited at the thought of starting a yoga practice, forJuquille Johnston his initial reaction was perhaps a bit more... Hesitant.

Juquille's teacher was Eddie Stern, who was leading a yoga summer program. Eddie recalls Juquille's first impression of yoga, sharing that he “didn't really [seem to] like it, but, by the end of the class he was pretty relaxed, and he came back. So, the fact that he came back was just an indication that he was interested in looking deeper into his own life.”

Despite the fact that Juquille wasn't instantly ready to embrace yoga, he returned, time and time again, to practice. Now, years after his first time on the mat, Juquille truly values his practice and acknowledges how it has changed his life in a positive way. “It changed my whole outlook on life, period,” he says, “my decision-making, my discipline to do certain things—everything is much clearer now. I have conditioned myself to actually sit and make a decision instead of acting on impulse or just reacting.”

Even back at the start of his practice Juquille noticed the positive way in which yoga was beginning to affect him, and asked if he could bring his friends along to practice as well. As he and his friends practiced, they began to realize that they were “on to something.”

Jaytaun McMillan—a friend of Juquille's, and an Urban Yogi too—likens what his practice has shown him to “wiping a mirror, or fixing a screw, like tightening something up," he says. “It helped us better our lives in many different ways on and off the mat,” he explains, “these practices gave us better guidance through life.”

“These kids come from really, really harsh backgrounds, that's just right here in New York,” Eddie explains. “The idea was to basically give kids these alternatives to guns, drugs, and the 'street life.' ”
And Eddie had the opportunity to do just that by working with a group called "The 100.” Approached by Deepak Chopra, Eddie was introduced to Erica Ford, who organized the group. The 100 was comprised predominantly of kids (and some parents) who had been affected by, or lost someone to, gun violence.

Alongside Deepak, Eddie worked with The 100 group once a month for a year, doing yoga and meditation with them. According to Eddie, that following summer he and Erica spoke about creating a summer program—the very summer program that brought Juquille and Eddie together, followed by Jaytaun and their friends.

Later, Eddie was approached by Deepak to collaborate for a YouTube-based yoga series. Wanting to bring more to the series than just instructional videos, Eddie looked for ways to make the series enlightening and different, while still adhering to the key element: yoga. “So I decided,” Eddie recalls, “that I would just collect all the groups I'd worked with over the years—different students of mine who had compelling stories—and we would do six to seven-minute long videos on those stories. Deepak called the series 'The Urban Yogi Series' and that's how the term 'Urban Yogi' came to be applied to these guys.”

As Eddie sees it, “it was because of Erica Ford.” She extended an invitation to Deepak to “come and help people who she was working with who had been traumatized by this severe and excessive violence, economic disparity, and police brutality. Not necessarily all the time brutality, but just policing of their lives all the time,” Eddie explains. From there, Deepak then extended the invitation to Eddie, and, “Thats how I got into it,” Eddie says, “that's where the Urban Yogis came from.”

Both Juquille and Jaytaun recognize yoga as “something different.” While for some yoga may seem relatively commonplace, according to Juquille and Jaytaun this is not the case for people in the communities where they're from. “Just from solely studying and practicing with Eddie we started to see the transformation in all of us," Jaytaun says. “We were like, wow, this really works, and this is something that can be used for everybody, especially coming from the communities where we come from.”

Growing up in the Baisley Park Housing Projects, the two recognize that it's easy to get swept up into the endless cycle of negativity around them. They both expressed that it's easy to "fall victim.” Through the Urban Yogis program Juquille and Jaytaun hope to bring positivity to the community and be a catalyst for change. The Urban Yogis are also tackling and breaking down stereotypes—stereotypes that offer an inaccurate depiction of who yoga is meant for, and how it ought to be used.

By using yoga, meditation, and mindfulness practices, the Urban Yogis program hopes to reduce violence and change the mindsets of those they work with. “If we can get them to think before they act then it will work out both ways,” says Jaytaun. “Helping them to just think for themselves, not be so reactive to impulse. Once you start to make those changes in yourself, then automatically the things around you start to change. We're living proof.”

The Urban Yogis program is, at its core, all about access. It's giving people, of all age ranges, from all communities, access to the tools that will allow them to work toward living a happier and healthier life.
“When you're given a tool, a good tool, and you're taught how to use it—and you remember to use it when you need it—then your life can change,” Eddie says. “They're tools which are easy enough for anyone to use. So, it's just a matter of getting these tools to the people who need them. And that's what the Urban Yogis do."

Urban Yogis in Public Schools: A Special Connection
Working in public schools in their community, the Urban Yogis offer yoga classes both as electives and in replacement of regular gym class. In speaking about their experiences, Juquille and Jaytaun say that seeing change happen before their eyes is both rewarding and proof that what they're doing has purpose. In fact, according to Juquille and Jaytaun, one of the girls that they taught went on to graduate and come back to the same school to then teach wellness instruction with another teacher.

Setting them apart from other programs that offer yoga in schools, the Urban Yogis have a relatable aspect that not all others have—they are teaching groups that they share similar backgrounds with. “It's good to surround people with the same background that went through the same problems,” Juquille says, “It helps us feel connection with each individual in the program.”

Urban Yogis in the Community: Everyone is Welcome
Outside of the public schools, the Urban Yogis also offer a separate program at Brooklyn Yoga Club. They're striving to create a welcoming, comfortable space where anyone would feel welcome. Regardless of background or experience with yoga and meditation, the Urban Yogis make their classes a judgment-free zone, and a place where you can be yourself. “We run the program to the point where you're still able to be you. We're not here to try to make you 100 percent yogi. We want to give you the tools to let you help a better life," says Juquille.

“It's all about self-empowerment. Giving the power back to [the] self,” Jaytaun adds. “It's not a program that builds on violence. We won't talk or focus so much on violence—it's knowing who you are, what you love to do, and what makes you you. These types of conversations are global conversations."
Both Juquille and Jaytaun emphasize that everyone is welcome.

"If you come from a background of violence, or drug abuse, or you grew up in the suburbs—the doors are still open," says Juquille. "There are no restrictions on who can come into the program.” To make these classes more accessible to those who may have to travel to make it there, a stipend is offered to those who attend.

To help keep doing what they're doing, the Urban Yogis are always looking for funding. If you'd like to contribute, take a class, or learn more about the Urban Yogis, visit their website here.
Photo courtesy of Urban Yogis

You can also help support the Urban Yogis by checking out this "Designer Yogis" sweatshirt collection from The Numinous (10 percent of all sales will be matched with a donation to Urban Yogis).


You can also help support the Urban Yogis by checking out this "Designer Yogis" sweatshirt collection from The Numinous (10 percent of all sales will be matched with a donation to Urban Yogis).