This post should probably be prefaced with one simple fact:
Our style of travel is not for everyone.

We fly by the seat of our pants. We bob and weave our way through blunders like road detours, closed restaurants, and impending hail storms...making up new routes and new plans as we go.

We make the most of every minute and we utilize every. single. minute.
We live by the adage, 'We'll sleep when we're dead.'

If that's not for you, that's ok.
The point, really, is this—no matter how much time you have,
there is always time for adventure.


Our trip started in the very late hours of a Saturday in September.
We flew into Albuquerque International Sunport,
had the usual 'which way do we go' fiasco for about 15-20 minutes, and made our way out to the curbside to wait for the shuttle that would take us to the car rental desk.

CAR RENTAL
Open late, and with affordable SUV rental rates,
we went with Hertz and rented a Ford Expedition.
Side note: this car is actually really rad, and super comfortable
(and that's saying a lot, because we spent more time sitting in this car than anywhere else).

SLEEP SPOT
We weren't looking for anything special.
We had about 5 hours to sleep before we made our way out to our first hike of the trip.

The Sheraton checked all of the necessary boxes:
✓ Close to the airport
✓ Clean
✓ Comfortable
✓ Close (enough) to our next destination

We hit the road bright eyed and bushy-tailed at 5AM.
The drive from The Sheraton to Tent Rocks is about an hour,
and we love to hike at sunrise,
so we thought we'd get an early start.

When we arrived, at about 6AM, we were greeted by locked gates.
We took the opportunity to clamber into the trunk,
pop the door open,
take in the sunrise,
and enjoy a pre-packed breakfast.


At about 6AM one of the park employees rolled in
and informed us that we wouldn't be allowed in just yet,
and he locked the gate behind him.
At 6:30, though, he beckoned us through.
(I think, technically, the park opens at 8AM,
but if you're a genuine, kind, dirtbag you might just get lucky)

If you're an early-bird like we are you'll likely be the only car in the lot,
which means you'll have the park + the trail to yourself for quite some time.
That's a solid #WIN. 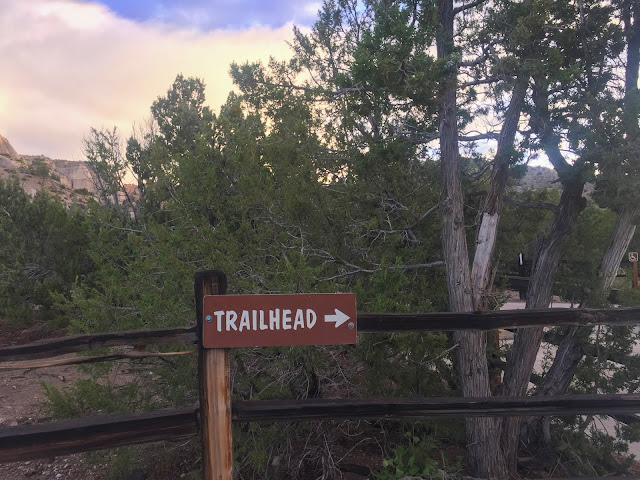 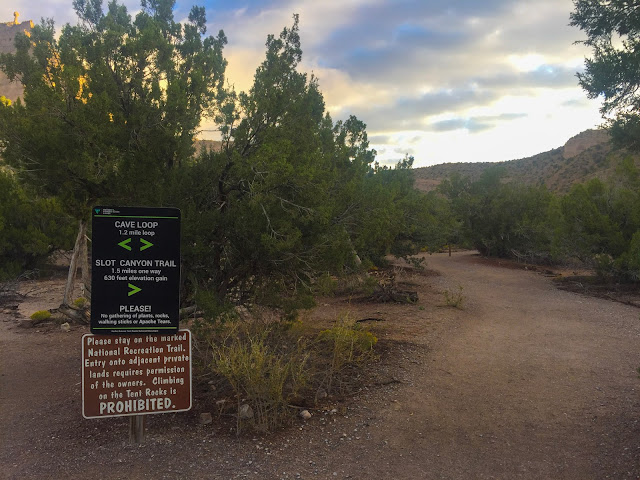 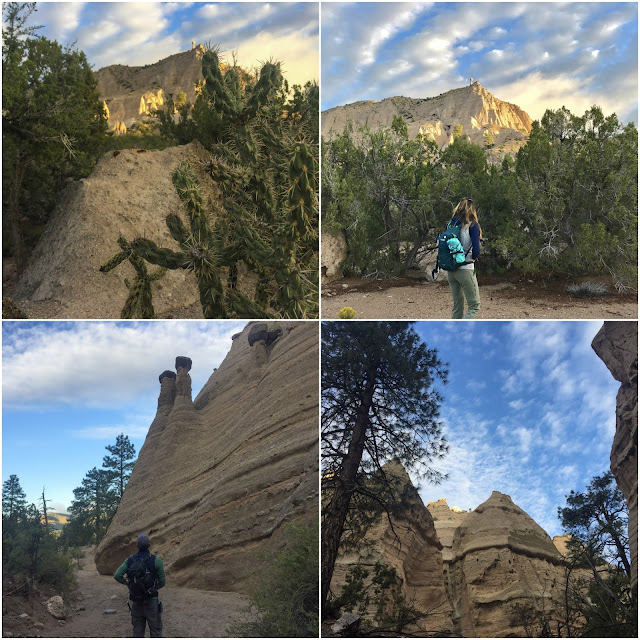 I would rate the Slot Canyon Trail an 'intermediate' level
as there is some scrambling involved,
and there is a bit of an elevation gain, too
(it's a 630ft. climb according to the BLM site).

For those who are claustrophobic note that the slots are not terribly tight,
though there are some spots that might make those who
don't enjoy tight spaces a little uncomfortable. 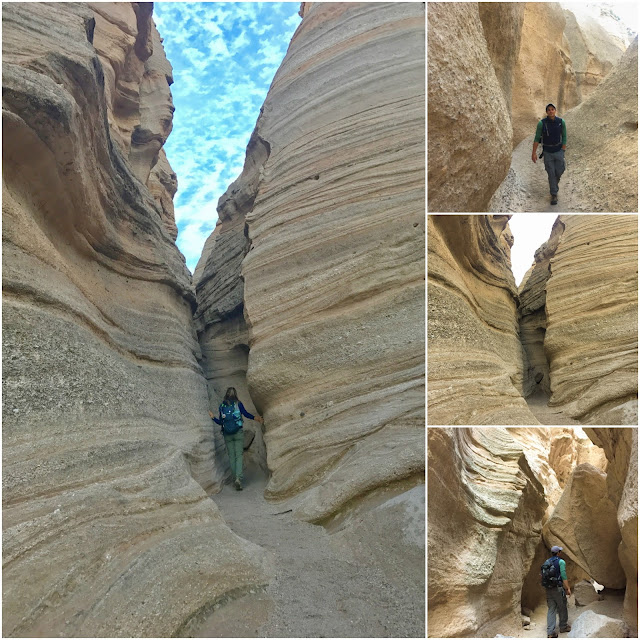 As you make your way up and through the slots the trail will eventually open up
and the views will blow. ya. damn. mind.

Also—I feel that I should mention that September is an absolutely s t e l l a r time to plan
a trip to New Mexico. We did get a few rain showers, but overall the weather we had was spectacular
and the temperature was ideal for hiking—not too hot, not too cold...just right. 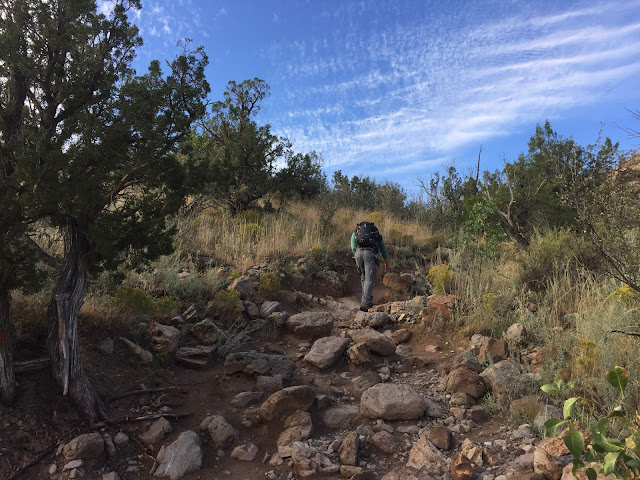 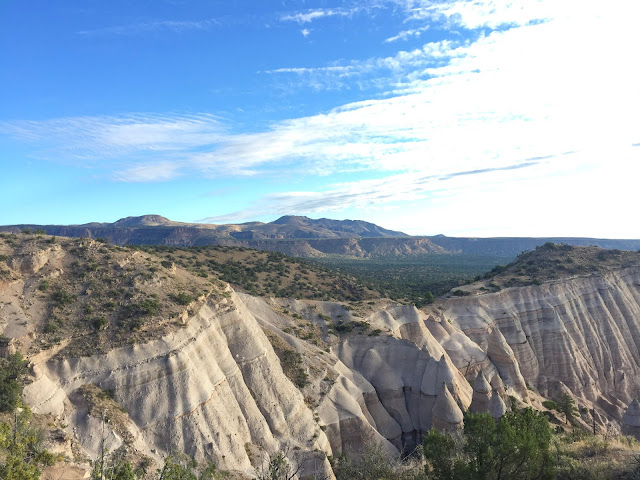 There are so many spots to stop and take it all in.
Do that.
Howl into the abyss.
Hear + feel the energy you're emitting reverberate back at you.
This place, this landscape—like so many in New Mexico—is otherworldly.
You'll be scratching your head like...how the fook did these tent rocks even form?
Were dinosaurs here?
Have we entered another dimension? 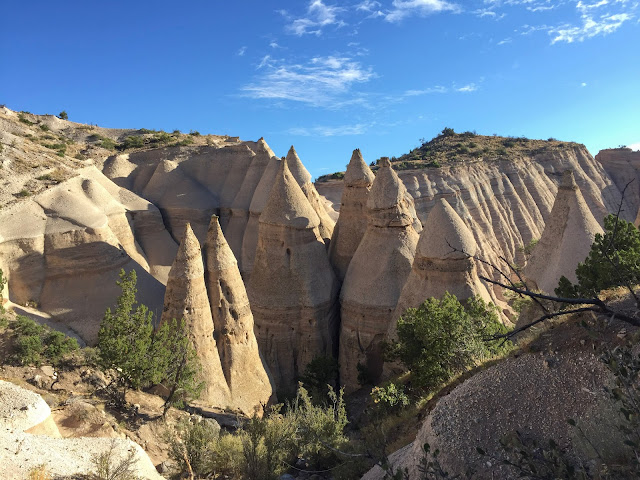 Drink it in. Enjoy the solitude (if you're fortunate enough to have the trail to yourself).
And, make sure you take the trail all the way to the top to really experience the awe. 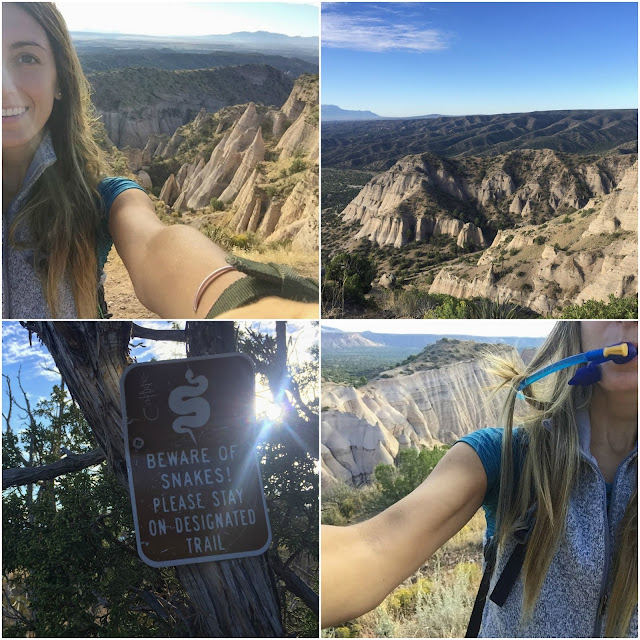 Because this is an out and back trail,
you'll head back through the slot canyon to pick back up the
Cave Loop Trail.
On your way back to the lot,
be sure to take the Cave Loop Trail
the opposite way so that you can see the other side of it.
Enjoy the flora and fauna along the trail that add an
interesting juxtaposition of color, life, and softness against the rocks. 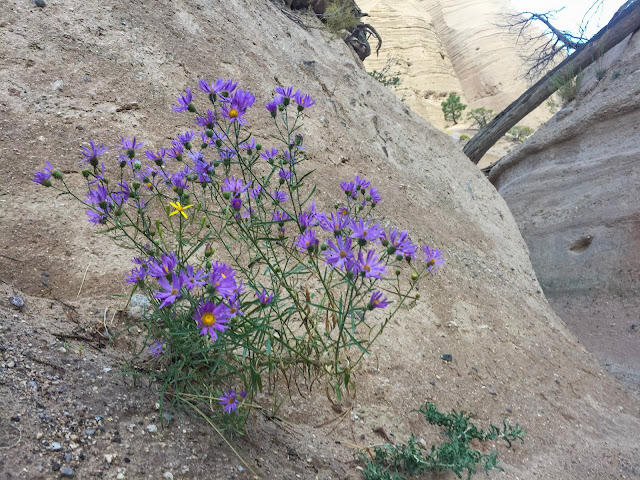 Have yourself a bathroom break, and/or a snack break,
and then get ready to hit the road for the next destination. 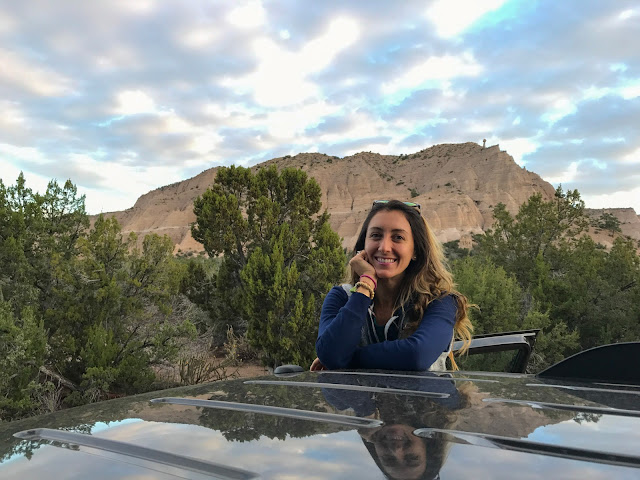 We were supposed to have brunch/lunch at Pig + Fig Bakery
(it is close by to our next destination)
which had an extensive menu that was perfect for me (vegan, GF)
and my hubby (will eat anything)
....but I didn't check if it was open on Sundays.
My bad.
So our lunch was snacks we had packed,
plus a few gas station pick-me-ups like Gatorade and Fritos.

So, travelers, take note: Sundays + Mondays things have a tendency to be closed,
best to check before you leave, rather than when you're on the road...and hangry.
--

About an hour + 1/2 drive from Tent Rocks, and ahead of schedule thanks to the restaurant snafu,
we arrived at Bandelier National Monument.

When we entered the park we were initially told that we would not be able to park at the Visitor's Center and would have to find parking in an alternative lot and take a shuttle in.

We opted for the small parking lot at Juniper Campground.
If memory serves, this lot accommodated about 10 cars,
(if that # is wrong, just note that it's a small lot with limited spots)
so we were fortunate to have landed a coveted spot there.

Rather than wait for a shuttle we decided to hop on the
Frey Trail and make our way into the park on foot. 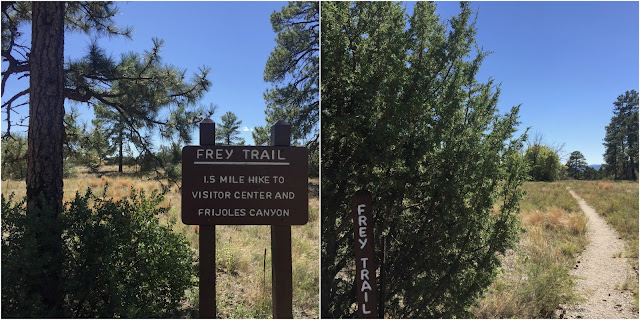 The Frey Trail offers a steady, somewhat steep, descent into the park,
but it's not an overly strenuous hike in.
The trail is well maintained—in fact, while we were there,
members of the NPS were actually on the trail improving the quality of the steps down.
On a Sunday.
In the sun and heat.
P R O P S!

Seriously, though, there is very little shade on this trail,
and once the sun is up you will cook.
So, don't forget to bring an ample supply of H2O, wear sunscreen, and bring your shades + hat. 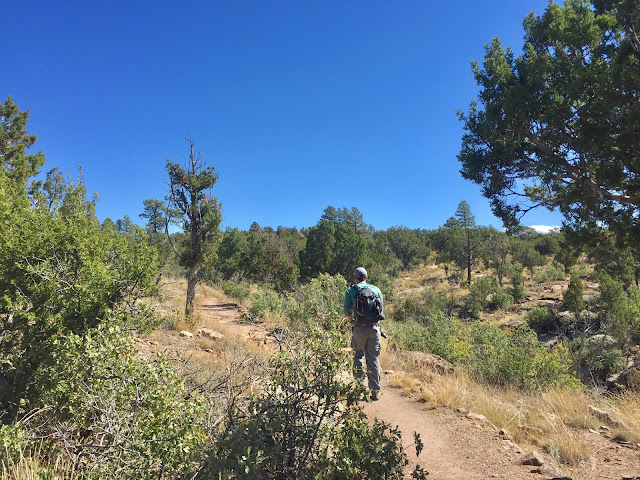 The walk down into the park provides stunning, sometimes dizzying views.
You're walking on a very high up ledge. If you've got a fear of heights, know that you'll be walking alongside a sizable drop-off. 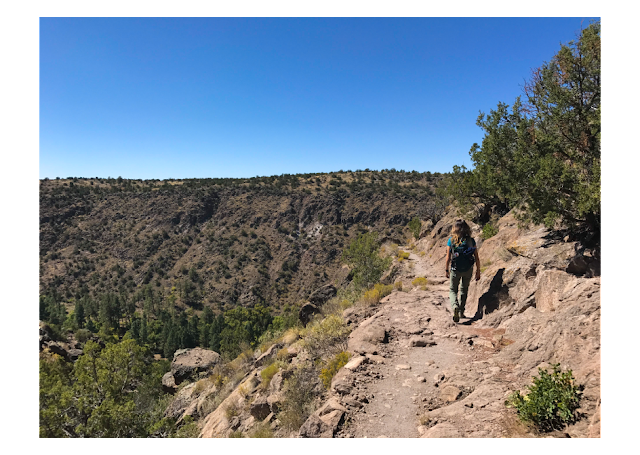 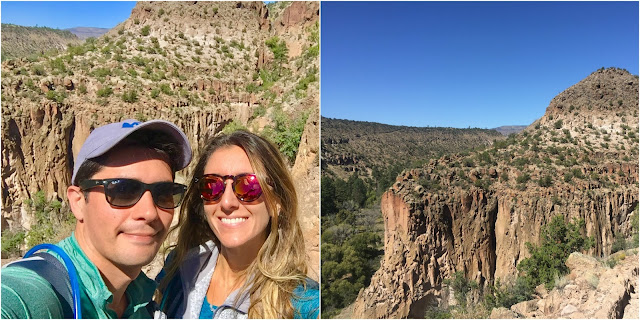 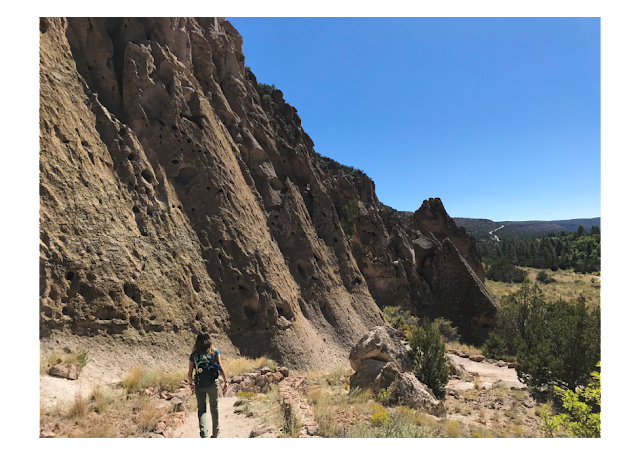 Once we made our way down into the park we followed the trail alongside the Cliff Dwellings.
We were en route to the Alcove House,
which I'd read might be closed (see, I do do some helpful pre-research),
but fortunately for us it wasn't!
*If you're hoping to check it out, too, be sure to check beforehand as the Alcove House
may be closed for ladder / trail maintenance.* 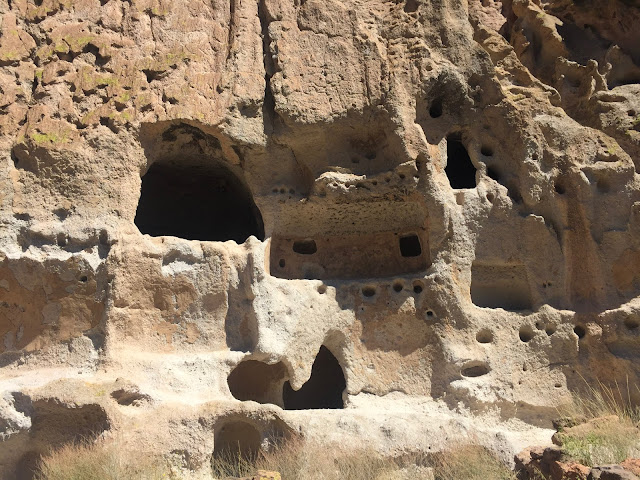 Remember how I mentioned ladder maintenance?
In addition to covering a fair amount of flat land,
visitors must also climb a series of four ladders to make their way up to the Alcove House.
It's 140ft up. 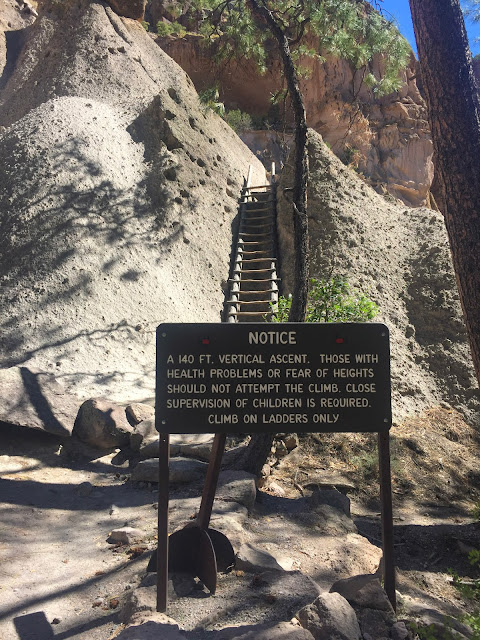 Again, if you've got a fear of heights, please take that into consideration.
Despite the fact that I have no issue with heights
I still found my heart racing as I made my way up. 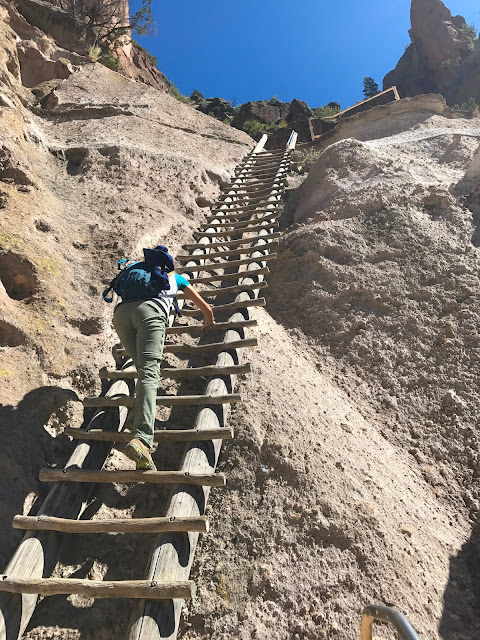 As is the case for most heart-pumping activities (at least in my opinion)
it's worth it.
This climb is worth the sweaty palms, worth every 'don't look down' second.

The views from the top are incredible,
and the energy of being in this ancient space is something that can't be put into words.

According to NPS, the Alcove House was "once home to approximately 25 Ancestral Pueblo people."
Once you get up there you'll probably have the same thought that I did:
HOW did 25 people share this space? 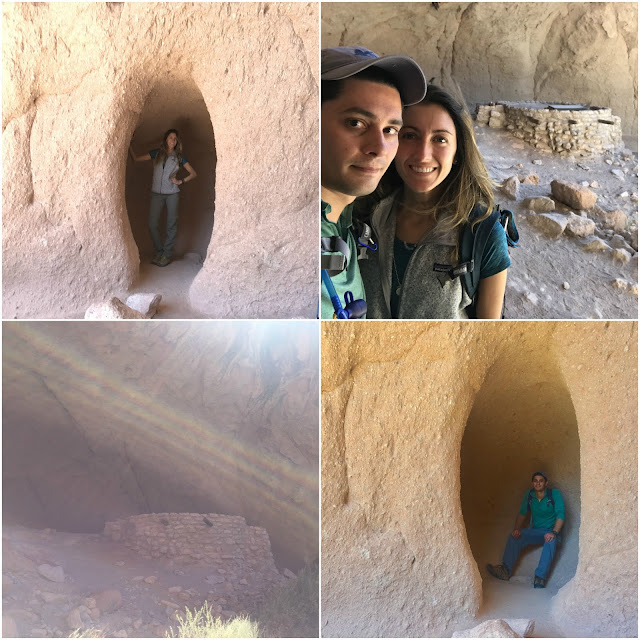 We made our way back down the ladders
(which, in my opinion, was scarier than going up)
hopped back on the trail and made our way to the visitor's center.
After putting in a fair amount of mileage on foot for the day
we decided to head over to the visitors center,
buy a souvenir,
(I'm a sucker for trip tchotchkes, and always happy to support NPS)
and take the shuttle back to the car.

On to the next destination!

I refused to be in New Mexico and NOT see the Rio Grande Gorge Bridge.
It wasn't exactly on the way, but Ger obliged.
It's one of those landmarks ya just can't miss when you're in the area.


We were pretty much all hiked out at this point,
so a pit-stop that wasn't physically exerting sounding like a nice option to us both.

It's not really a spot to spend a ton of time, but it's worth checking out!
Pro tip: It's crazy windy standing on the bridge,
and even though it was warm out we were quite cold!
Bring a sweatshirt!

Aside from the standard roadside fast-food joints,
there were not a ton of restaurants on our drive from the Rio Grande Gorge Bridge
to Stop No. 3 (where we'd finally get to take off our hiking clothes, shower, and sleep).

Leave it to me to find a saloon, though.
I wanted something that felt at least a little authentically Western.
Truth: the food was just ok, but it was worth the stop. 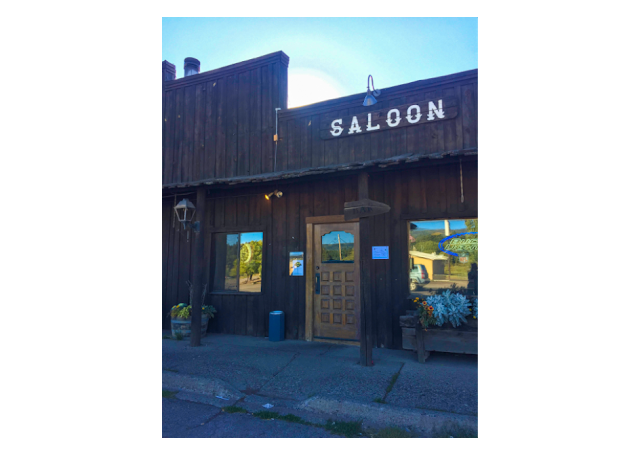 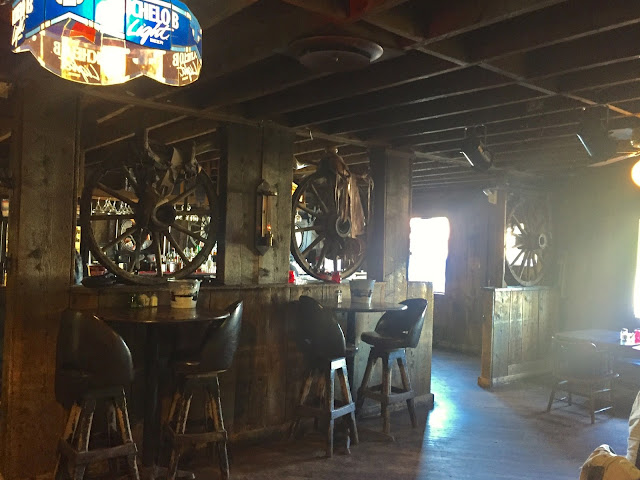 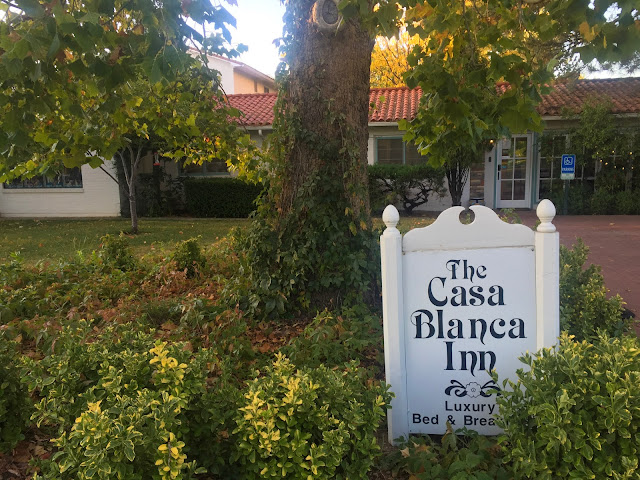 You ever walk into a place and think...I want e.v.e.r.y.t.h.i.n.g?
Casa Blanca Inn is that place for me.
There is so much attention to detail in the decor.
..and I wanted to take everything home with me.

I never knew sink envy was even a thing until I arrived here. 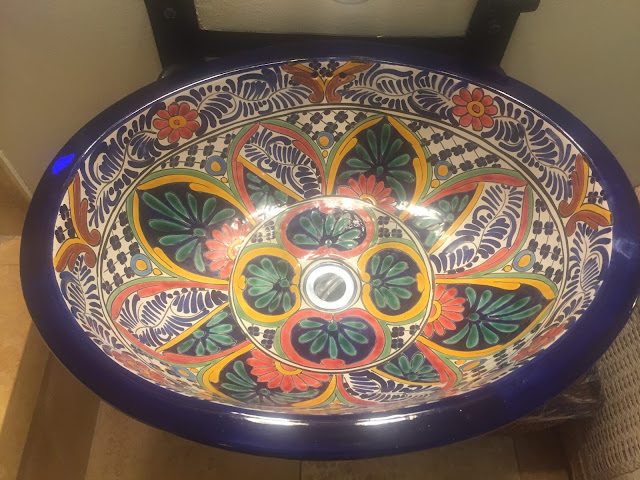 It's a small inn, with only nine rooms, which only adds to its charm.
The rooms are cozy and inviting,
and equipped with everything you could possibly need and want
to have the comforts of home while you're away.

My only regret is having just one night to stay here. 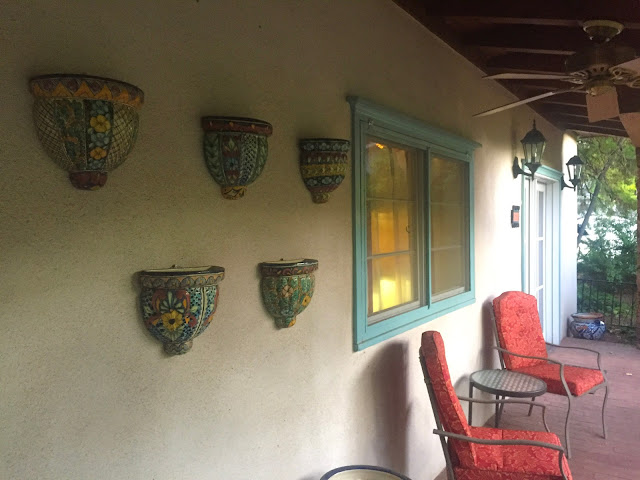 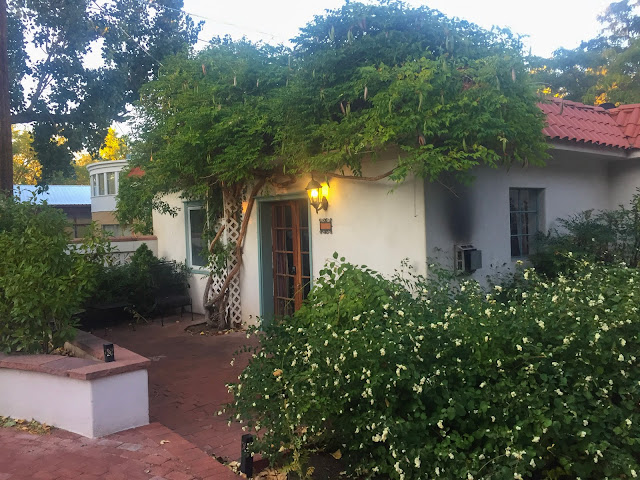 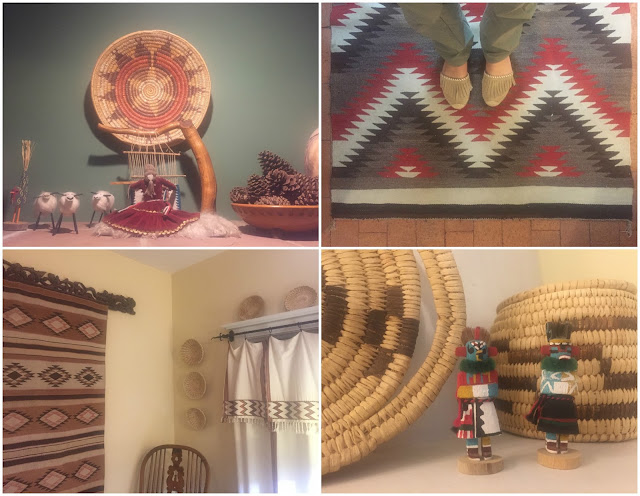 Stay tuned for the next 72 hours of our New Mexico adventure! 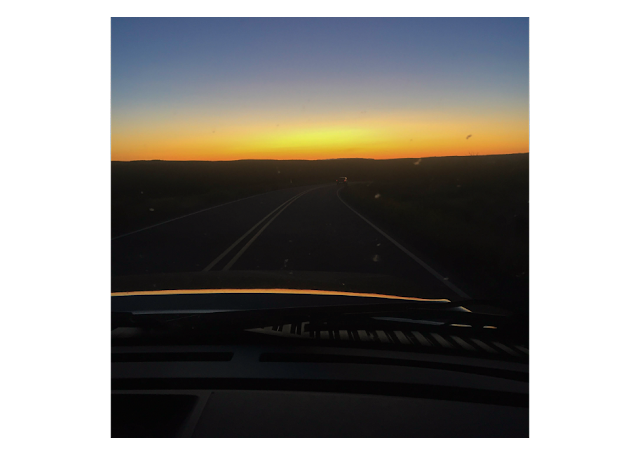