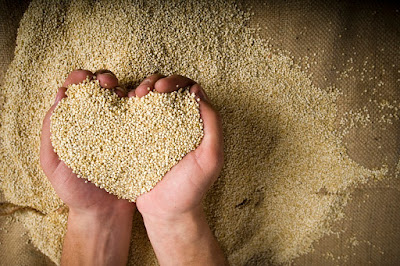 Disclaimer: This is not a PSA to make you put down your burger and immediately become a vegetarian, or vegan.

That being said... Sharing this new research is intended to help you be more mindful of your diet's impact. And in learning about the effects of a meat-based diet on your health and longevity you may find yourself reconsidering some of your decisions as a carnivore (or omnivore!) and consumer. Did someone say veggie burger?

We all need protein in our diet, that's no secret. Protein is essential in maintaining a healthy, functioning body. As we can probably recall, deep in our brains from high school biology class, protein is one of the “building blocks of life.” It runs through the cells of our body, and we need it in order to achieve optimal health.

So what can we turn to in order to ensure that our diet is rich in protein? The most common assumption is meat. While that isn't incorrect, animal-based protein may not be the healthiest source. In fact, according to CNN, recent research published in JAMA Internal Medicine has shown that animal-based protein—particularly in the form of red meat—“may be linked to a higher risk of death.”

The study, with 131,342 participants (men and women), looked at the correlation between animal-based protein and mortality. Of the participants, all had at least one habit that was deemed "unhealthy," such as smoking, excessive drinking, or obesity. With adjustments made for the “lifestyle risk factors,” researchers were able to conclude that consumption of animal-based protein was associated with a higher mortality risk—“particularly cardiovascular mortality” than that of those who consumed plant-based protein.

This particular study revealed that the quality of the source of protein may be equally as important as the intake itself. As concluded by the researchers behind the study: “Substitution of plant protein for animal protein, especially from processed red meat, may confer a substantial health benefit. Therefore, public health recommendations should focus on improvement of protein sources.”

So, if you like your food to come with a lower mortality risk and hazard ratio, it seems the best—and healthiest—bet is to fill your plate with plant-based protein. According to the research, in comparison with animal-based protein, plant-based protein appears to be the better option for your long-term health and longevity.

Bonus point for plant-based protein? It also has less additives. Researchers noted that those “other components in protein-rich foods (i.e., sodium, nitrates, and nitrites in processed red meat), in addition to protein per se, may have a critical health effect.”

Go Green for Your Protein

If you're new to this plant-based style of living, we'll give you some direction. Sources for plant-based protein are easier to come by than you might think. If you're not quite ready to give up burgers, a simple transition is to opt for a veggie or meatless one instead. Impossible Foods has spent years creating a meat-free burger that even "bleeds" like a regular burger would. Other plant-based protein-rich sources to add to your meals are quinoa, edamame pasta, firm tofu, beans, nuts, and seeds (chia, hemp, etc.).
Have fun experimenting with new ways to get your protein through plant-based ingredients and meals.
Live long and (plant-based) prosper!

Choosing plant-based proteins over animal-based ones also has an impact on the environment. While it's easy to think that we as individuals can't make a difference, that couldn't be further from the truth. According to One Green Planet: “Beef eaters use 160 percent more land resources than people who eat a plant-based diet.”

When it comes to protein, the amount of plant protein produceable by acre compared to that of meat is eye-opening to say the least. One Green Planet reports: “We can produce more usable plant protein per acre than meat protein,” as much as “seven times more protein per acre." So opting for that package of veggie burgers over beef patties is a step in the right direction, for both your long-term health, and the planet's.

Remember this: It all starts somewhere, and any contribution—big or small—to the greater good of the planet is a win.

How do you get your protein?