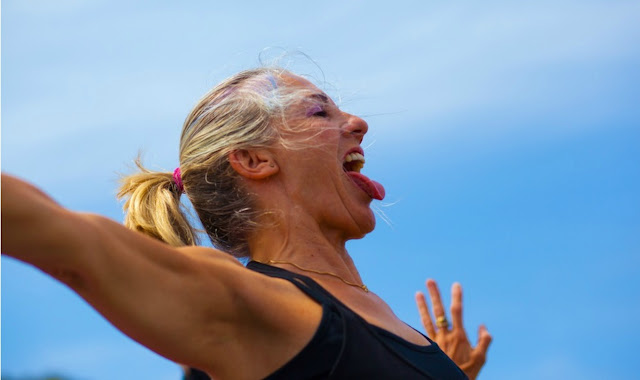 Deep breath in, deep breath out, followed with a long, peaceful OM.

This united group breathing, the deep sigh, where we connect with our breath is one of the most important parts of our practice. But how often do you connect to your breath when you're off the mat? Tune in and you'll find that a deep sigh happens more often than you might realize, with or without the OM.

Research shows that people sigh around 12 times per hour (about one sigh every five minutes)—that's 288 sighs per day—an involuntary action you probably weren't even aware you'd been doing so often. These sighs not only feel good, but they do good, too (deep breaths = healthy, happy lungs!).

These deep breaths are actually helping lung capacity, as the little sacs that live within our lungs, called alveoli, get a mini-workout with each heavy inhalation. Jack Feldman is a researcher from UCLA who was involved in a recent study on sighing. He's quoted in Science Alter saying that “when alveoli collapse, they compromise the ability of the lung to exchange oxygen and carbon dioxide. The only way to pop them open again is to sigh, which brings in twice the volume of a normal breath.”

Often when we hear or see someone sigh we seem to give it a negative connotation, assuming that their sigh is out of displeasure, exhaustion, or frustration. But this is not always the case. In fact, according to Discovery, sighing is like “a human reset button.” So while there may still be people sighing in sadness, there are likely just as many sighing in relief.

Something that may not be obvious is the apparent chaos of our breathing. Different activities, altitudes, and situations—even just sitting in a chair—can cause our oxygen needs to fluctuate tremendously. And, according to Discovery and Biological Psychology's Elke Vlemincx and her co-authors: "Results show that the respiratory dynamics are different before and after a sigh. We hypothesize that a sigh acts as a general re-setter of the respiratory system."

While we may not always be readily tuned in to our breathing habits, our brains certainly are. According to UCLA Newsroom, a team of researchers from UCLA and Stanford have been able to discover and identify the neurons within the brain that are responsible for this deep breathing, for converting our normal breathing into sighs. UCLA Newsroom goes on to state that this discovery “may one day allow physicians to treat patients who cannot breathe deeply on their own—or who suffer from disorders in which frequent sighing becomes debilitating.”

It's true: Sighing doesn't bring relief to everyone. "Frequent sighing" is a problem that people with anxiety and panic attacks often face, as incessant sighing can actually result in some negative symptoms that accompany hyperventilation.

ABC Science touches on this issue, in conjunction with clinical psychologist, Frank Wilhelm, from the University of Basel in Switzerland, writing that in an effort to help those struggling with frequent, excessive sighing, "a training program involving biofeedback was developed to help panic disorder victims get control of their sighing."

Side note (and perhaps a new study idea?): After writing this I'm left to wonder if sighing is similar to yawning, where when you talk about it, or see someone else doing it, you involuntarily do it, too. I'm not sure if I've just tuned in to it more, or if it's because I'm writing about it, but I'm a sighing machine right now.

Tune in to your breathing habits. Do you find yourself sighing more often? Let us know in the comments below.