so, in honor of that i'm finally getting back to the blog.
i've been meaning to write about our trip to pinnacles national park for so long.

can't believe i'm finally getting to it now—2 months later!

we went to california in august for my best friend's wedding
(see: san francisco post)
and decided to rent a car to get as much out of the west coast as possible.
we were flying in and out of san francisco airport, so we took a long
(like really long... post coming about this soon, too, promise)
ride down the coast through big sur and made our way to paso robles for the wedding.

post-wedding we knew we had a long
(not as long as the first drive, thankfully)
ride ahead of us back to san francisco airport,
and an even longer wait once we got to our terminal,
(gotta love red-eyes!)
so ger suggested that we try to find something to do along the way.

a little googling later, i happened upon pinnacles.

i'm pretty sure i said "this looks flippin' sweet, and we need to go"
to which he replied, "done." i love this guy.
knowing that volcanoes had formed what we were about to see was pretty
mind blowing. so, needless to say, we were really excited to get there.

we stopped at the visitors center on our way in to grab a map
and hit the bathrooms before going on this adventure.
thankfully, we were more prepared this time than we were for our san francisco hike.
anyway, the woman at the center suggested that we buy flashlights for the caves
(uh, what? what caves? i don't like the dark. SOS.)
we politely declined, gesturing to the flashlight app on our phones and were on our way.

she also said that we should watch out for rattlesnakes.
so, for the first 20 minutes of the hike
i must have asked gerry 10 times
if he really thought rattlesnakes were out here.
he did.
cool.

anyway,
there were a few different hike options.
personally i love a good loop trail.
no doubling back on what you've already seen,
just new-ness all the way 'round.

so, we picked a short-ish loop and headed out on balconies trail,
we started on the balconies cliff trail,
which would then turn into balconies cave trail,
and bring us back where we started. 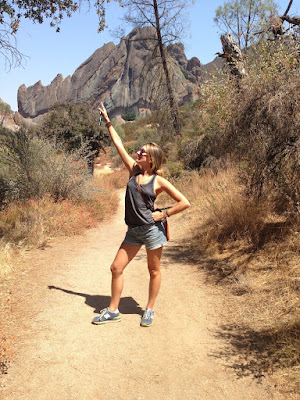 it was freakin' HOT, and the cliff side of the trail was pretty much entirely in the sun
with very short breaks in minimal shade.
if you're heading there in the heat of summer
be sure to pack some water, and wear sunscreen!

the trail itself was not terribly strenuous,
there's a decent amount of uphill hiking,
and there were a few spots that got my heart pumping
...though this could be due to the fact that i was walking along a cliff
(sometimes that trips me out, still)
or because i was immensely hung over from the wedding.

anyway to put it's difficulty level in perspective:
there were children, adults, and elderly, enjoying this hike...
there was even a woman with a stroller
which, to me, was just absolute pure dedication and determination
...it's not the easiest trail to navigate with something so cumbersome as a stroller,
so, props to her. 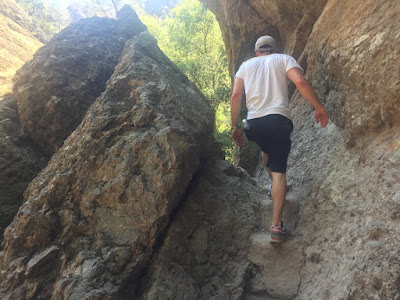 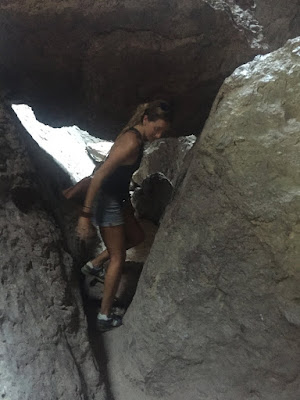 as we approached the caves the temperature got notably cooler.
since we had just been hiking in the blazing sun for the past
1.5 (ish) miles we were so happy to meet cool air, and shade.

a group of hikers were seated outside the cave and asked us
if we had flashlights.
they had started from the opposite direction, and had just come
through the caves.
we, again, gestured to our phones' flashlight to which they replied,
"ok, it's dark in there, have fun!"

so, it was really fucking dark.
and i became instantly aware that my iPhone flashlight
was pretty much shit.
also, have i mentioned i'm afraid of the dark?
you quite literally can't see your hand right in front of your face
without a flashlight.

we actually headed straight to a dead-end once we got in.
in the darkness it was a little difficult to find the way out.

had i been alone, total panic would have ensued.
thankfully, my darling guided the way,
and i just tried to avoid stepping on a rattlesnake or rat.
oh yeah, i forgot to mention that...
right before we entered the cave
i saw a rat.
so if you're ever wondering what could be hiding in the darkness,

personally, i'd recommend a head lamp for this section of the trail
only because you do actually have to climb out
over rocks,
and holding a phone/flashlight makes this a bit more difficult.

because i needed my phone/flashlight to see i didn't get too many photos inside the actual cave,
though we did stop as the light got brighter to take a few. 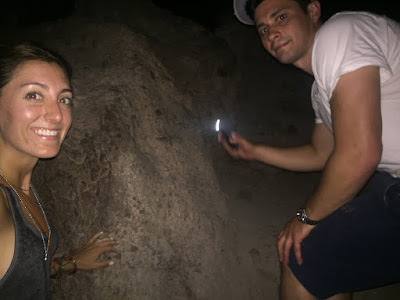 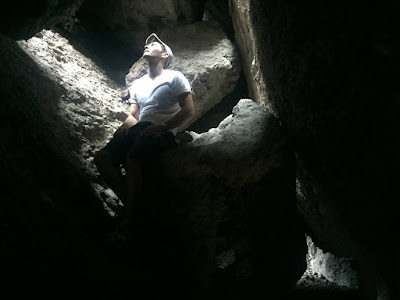 all in all it was about a 2.4 mile loop.
it took us about an hour and a half to complete,
and we were pretty sweaty by the end
(not that that's necessary information to share, but whatever)

it was the perfect break in our day to stretch our legs before
the drive to the airport,
and the long flight home.

the views were incredible, and the caves were awesome—even to someone like me,
who's afraid of the dark.
HIGHLY recommend this park to anyone heading this way.
apparently you can camp here, too, which i wish we could have done.

get out and get exploring!