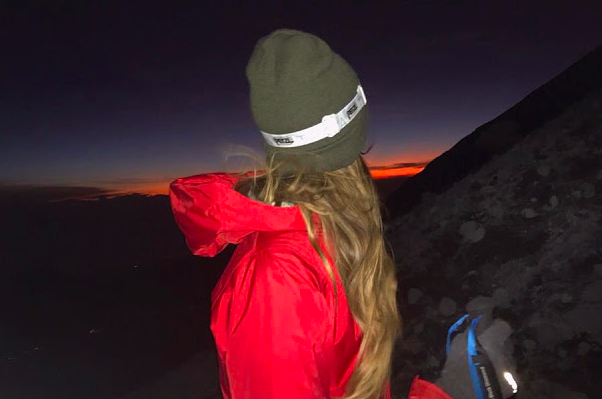 After a long day of hiking (see: Part 1) and finally falling into our tent at the end of it all I was hoping that pre-summit I'd be able to catch some zzz's. Unfortunately for me, my nerves refused to let that be the case.

Wide-eyed, and perfectly cocooned in my sleeping bag, I laid there shuffling my feet back and forth trying to rhythmically soothe (or possibly hypnotize) myself into a sleepy state. Thoughts of volcanic dust, rock scrambles, tightening lungs, and buckling knees danced in my head...

I turned to Gerry, hoping he was still awake and would be able to reassure me...he wasn't. So I did what any wonderful, adoring, thoughtful wife would do before a 2:30AM wake up call...I woke his ass up.

Though he tried, he didn't do much to calm my nerves. He passed his phone to me, "Want to watch a few episodes of Parks + Rec? I downloaded them on Netflix, so you don't need WiFi to watch." It was a gentle reminder that I married the right man. Ron Swanson has a way of calming me, and after a few episodes my nerves were replaced by thoughts of Lil' Sebastian and waffles.

I was out cold.

THE WAKE UP CALL

It felt like I'd just fallen asleep when Didi came "knocking" at our tent to wake us up.

On the morning of summit the first breakfast is light, and small—little sandwiches, some fruit, and hot chocolate. My stomach was far too nervous to eat, so I packed a Bobos bar and a Snickers for the trek.

We had about 15-minutes to eat and get ourselves set to go. My teeth chattered and my body shivered with a combination of a morning chill that I couldn't shake and adrenaline pumping at an all time high.

Since you'll be coming back down to the tent for a big breakfast and some down time post-summit you get to leave all of your things behind. Read: No need to lug your backpack up with you—and trust, you won't want to. The only gear you'll need for the trek to summit are your hiking sticks and a headlamp. Your guide will provide water as well, so that's another thing you won't have to worry about carrying.

Gerry and I both stuffed our pockets with other "necessities" like tissues (a wise choice!), as well as a camera, iPhone (for music purposes, and a back up to the camera), and sunglasses (the sun will be up, and strong, on your way back).

When it comes to getting dressed for this portion of the hike layering is key. The morning is cold, and it gets progressively colder—and windier—as you make your way to summit. 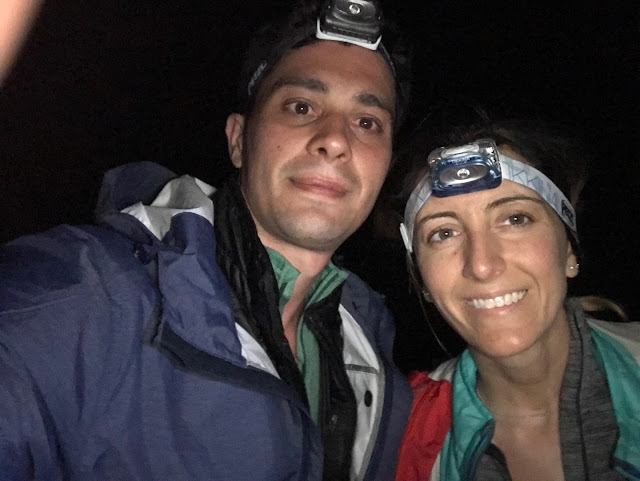 We walked in complete darkness, following the glow of headlamps up ahead. Dozens of hikers must have started hours before us—and I give them all heaps of credit, because I thought the 2:30am wake up call was rough.

It was so dark that if you turned your headlamp off you wouldn't even be able to see your hand in front of your face. I CANNOT recommend investing in a head lamp enough. It 100% beats holding an actual flash light.

The terrain going up is a bit wonky before you reach the ash, so you'll want to have one hand on your walking stick, and the other free to brace a potential fall—or just to help you feel your way around a bit better.

Navigating around people definitely makes for a challenge here, too.

When you first start out on the trail it will likely be a bit crowded, as everyone is waking up and getting moving around the same exact time. Rest assured, though, that the higher you climb, and the harder it gets, the more sporadic people in your way will start to become.

This trail is fucking hard. And it will take everything you've got. Pace yourself.

We took many, many breaks. And not once did our guide roll his eyes, try to hurry us along, or make us feel like weenies for pausing every 15 minutes.

You'll pass tons of people sitting and taking a break, and you may even pass a good few who have already turned on their heels to head back down because they know they won't make it.

Those people really started to get in my head.

We passed a few that said things like, "There's no way I can do it." or "My lungs can't handle it." That was my biggest fear—not being able to breathe as the elevation rose. Hearing quite a few people claiming that breathing was an issue started to get in my head, and I started to psyche myself out. I hadn't eaten anything yet, and my gas tank was nearing empty.

Up until this point we'd powered through a good chunk of the hike only taking a few five minute breaks here and there. I finally asked Didi if we could take a long break this time, trying to catch my breath as I spoke.

I leaned against a giant boulder, clinging to my stick—I had an incredible fear of it falling off the side of the mountain.

Didi passed our water bottle over. Gerry stood next to me, his hand on my shoulder, glugging down some H2O.

I looked past him, trying not to shine my headlamp in his eyes, “I'm not sure that I'm going to make it.” I didn't even want to utter the words, we'd already come so far. I swallowed the ever growing lump in my throat.

Shifting his weight from my shoulder to his stick, he reassured me, “Just take a minute, we're not in a rush.”

We were kind of in a rush, but I appreciated him more than ever for saying that. Looking out onto the horizon I could see the sun just starting to wake up—we were racing it to summit and at this rate it looked like the sun would likely beat us there.

Remembering the Snickers bar in my pocket, I decided to forgo the healthier option of a Bobos bar in favor of some sugary, chocolatey comfort. The three of us sat there, mostly silently, with our headlamps off looking up at the stars. I was begging my body for a second wind. Standing up after spending about 15-minutes on rejuvenation-rock I was ready to get back to the trail.

Slowly, together, we made our way up.

UP, UP, ENDLESSLY UP 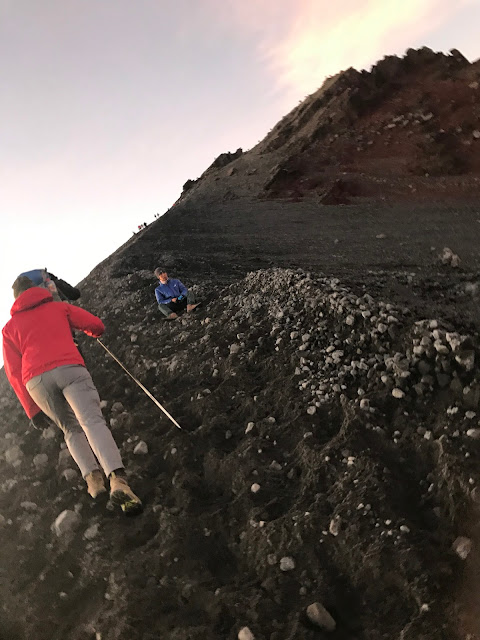 Of all the varying articles that we could find about this hike they all agreed upon one thing: When you reach the hardest part of the summit hike it's two steps forward, one step back. While I hoped that wouldn't be true, it sure as shit was.

The terrain beneath our feet was like climbing up an endless sand dune that was also inundated with fist-sized boulders. With the sun rising, the ground was illuminated making it at least semi-easier to try to strategically plant your feet.

Sometimes stepping on a bigger boulder helped, while other times it sent you to your knees as the boulder rolled out from under you.

You'll quickly learn there is no real strategy here other than putting one foot in front of the other.

You'll also quickly learn that your walking stick is your BFF. 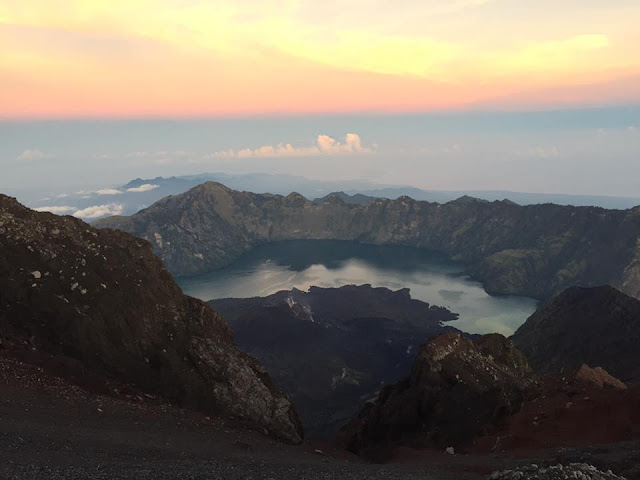 Tears were something I expected at the summit, but I never anticipated needing to bite my lip and will them away quite so many times.

Obviously, at this point in the hike, we were well aware that we wouldn't make it to the summit for the sunrise. At first I was disappointed by that fact, but as we climbed higher and Crater Lake came into view my mind was changed.

Seeing the sun rise over Crater Lake sent a lump into my throat...again.

I thought to myself, staring at the sherbet sky, "Even if I don't make it to summit, there's this. This is so enough." I can say with certainty that I've never seen a more beautiful landscape than this one. It gave me the second wind I was yearning for.

If it looked this spectacular from this vantage point I could only imagine how breathtaking it would be from the top. 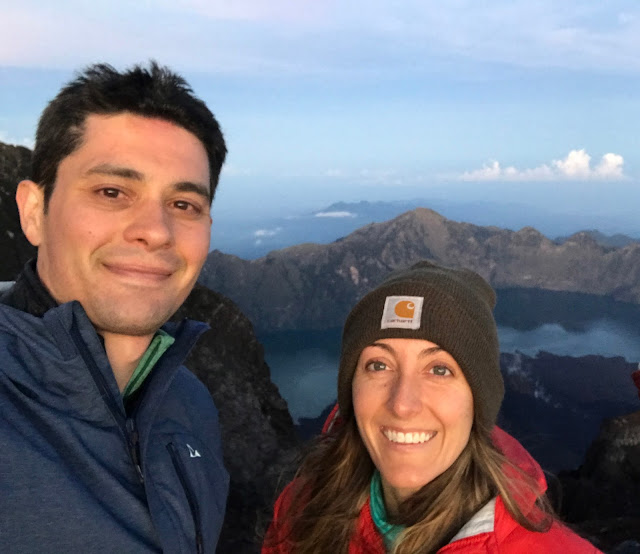 We took our time taking the views in, stopping at various points to take more photos, and looking back on how far we'd come.

I remember Gerry pointing down the mountainside somewhere in the direction of rejuvenation-rock and saying, "Remember when you wanted to stop back there?" 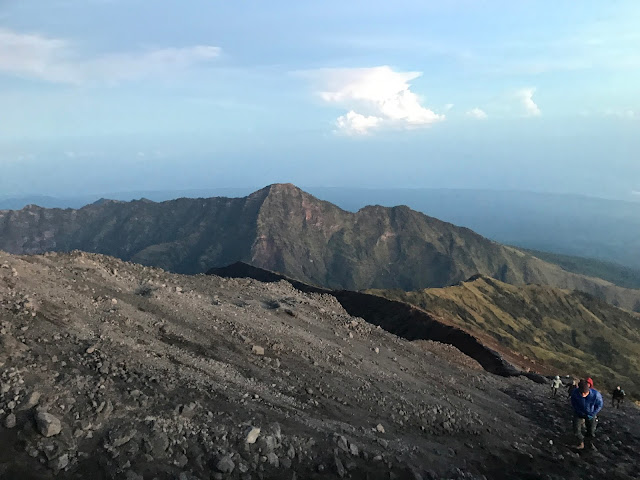 In our research we also read a lot about seeing a "false peak" a.k.a thinking you're nearly at the top when you're actually not. Thankfully, this false peak was lost on me. In my opinion, once you're walking alongside Crater Lake you can start telling yourself you're almost there.

As we made our way up from Crater Lake to the summit we crossed paths with a group of guys that we'd met the night before at camp. We exchanged high fives that they'd made it, and they sent us on our way with encouraging words as they headed back down from summit and we made our way up.

Adrenaline takes over as soon as you are close enough to see the groups of people at the peak.

You know it's within reach.

You know you're going to make it.

The soft ash pushing you down as you try to clamber your way up doesn't even deter you at this point.

That summit is yours. 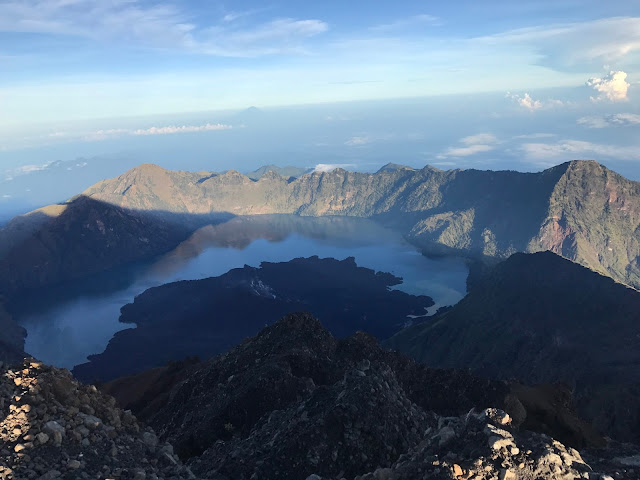 Elated, breathless, exhausted, nature-stoned, ecstatic, in awe, humbled, empowered, enlightened, and beyond blissed-out—just a few of the feelings that will course through your veins as you stand at the top of this 12,224 peak. 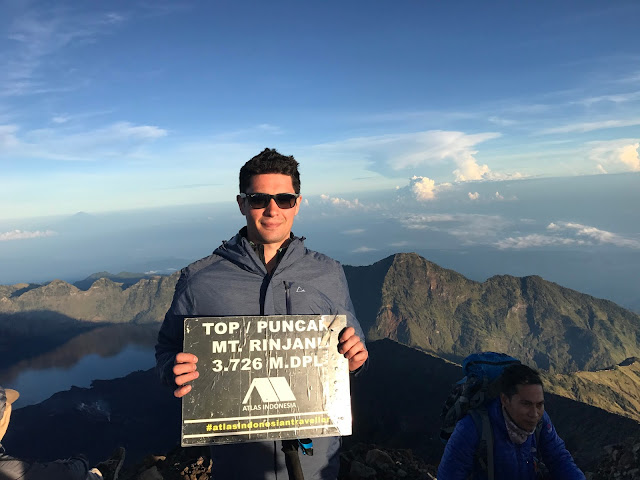 When we told people that this is what we planned for our honeymoon—the hardest hike of our lives—they thought we were insane.

In all honesty, we probably are a little insane.

But I couldn't, and still can't, think of a better way to have celebrated our marriage.

When we got back to camp I asked him, "Did you think, when I was sitting on that rock, that I wouldn't make it?"

He replied, "Not for one second." 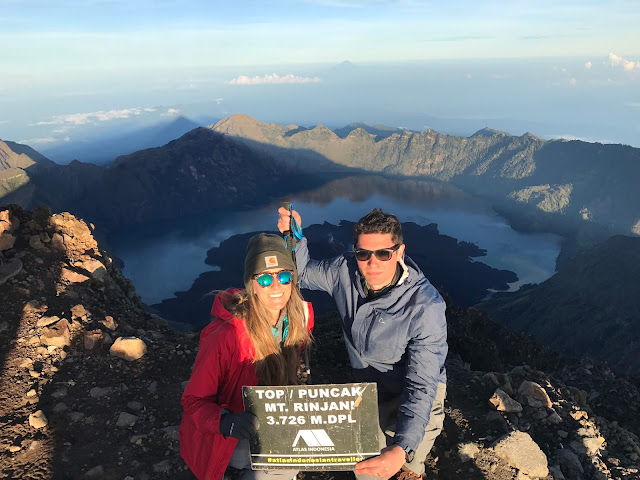 Stay tuned for Part 3—heading back down the mountain, and the slightly-insane decision we made once we got back to camp. 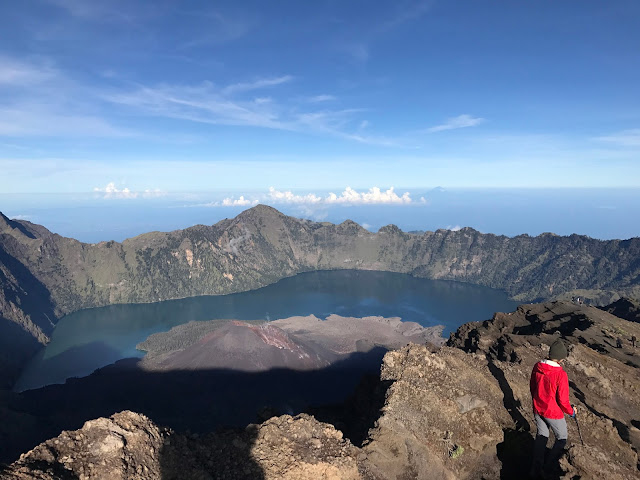